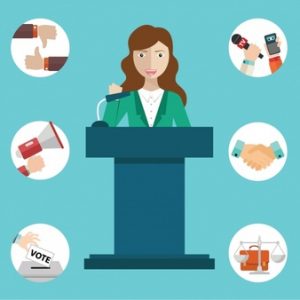 When considering politics in Latvia and Estonia, it is important to remember that they only acquire their full independence in 1991. Their experience with democracy in the 1920s was brief and ended up with an authoritarian regime before turning into Socialist Soviet Republic. Therefore, their consideration over politics are quite different than what we are used to in our old democracies.

Estonia is a parliamentary representative democratic republic. The executive power is exercised by a government, led by the Prime Minister (currently Jüri Ratas). As a parliamentary regime, Estonia as a President, which is a ceremonial figurehead without executive power. The President is to be independent and impartial: he or she must suspend their membership to any political party and all his or her elected offices terminate automatically. Kersti Kaljulaid is the current president and will stay in office until 2021.

The legislature power relies in the parliament, called the Riigikogu, which has 101 members. They are elected for a four-year term, on proportional representation. In the proportional system, the electorate votes for a political party, which gets a proportion of seats in parliament that represent the proportion of votes they obtained at the election. Estonia is based on a multi-party system. A party must gain at least 5% of all votes to gain entry to the parliament. The last parliamentary elections in Estonia were held on 1 March 2015. The Estonian Reform Party obtained 30 seats out of 101, which wasn’t enough to form a majority, the Estonian Centre Party has 27 seats and the Social Democratic Party arrived 3rd with 15 seats. Among its duties, the parliament also appoints the president of the Bank of Estonia, the Chancellor of Justice, the Chief Justice of the Supreme Court, and the Chief of the Headquearters of the Estonian Defense, based on the proposal made by the President of Estonia.

The Latvia Parliament, called the Saeima, has 100 members, elected by proportional representation with a 5% threshold. The elections are held every four year on the first Saturday of October. In the Latvian multi-party system, it is unlikely that a single party has a chance of gaining power alone: parties must work with each other to form coalition government. The last elections were held on the 4 October 2014. The Social Democratic Party “Harmony” obtained 24 seats out of 100, followed by Unity (liberal conservative) with 23 seats, Union of Greens and Farmers (green conservative) 21 seats and the National Alliance (national conservative) which obtained 17 seats. The government was formed by Unity, the Union of Greens and Farmers and the National Alliance.