Learning Expedition / Chapter 3 – An insight on the Baltics’ History 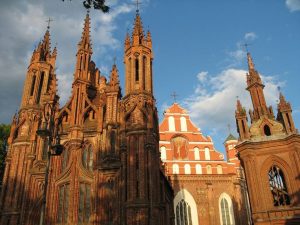 For many, Latvia, Estonia and Lithuania are three interchangeable pieces of the same puzzle, namely the Baltics. If geography finds a logic in this name for these three countries bordering the Baltic Sea, this unique denomination tends to make people believe that these three states are intrinsically linked and that they do not exist distinctly others. It seemed to us essential to talk about the History of the Baltic countries, or rather of the histories, sometimes so close but so distincts, of these little-known states. So before embarking on Tallinn and Riga, let us offer you a short getaway in Estonia and Latvia of past centuries.

The territories which today known as Estonia and Latvia have experienced a perpetual influence from its powerful neighbors, as well as long periods of occupation. Vikings, Swedes, Danes, Germans and Russians took possession of these territories in turn, depending on conquests and wars.

The first unification of the territory took place in 1228, when Pope William of Modena created the Livonian Confederation, a group of small states spread over the present Latvia and part of Estonia. This territory of Livonia was a papal legate, destined to appease the conflicts between the Church and the Livonian Brothers of the Sword, an order of Germanic “warrior monks.” In spite of numerous armed conflicts between the Brothers and the ecclesiastical states for territorial control, the territory prospered, and even extended to the North in 1346, by the purchase of Northern Estonia in Denmark, thus tracing its current borders.

While the city of Riga enjoyed the protection of Sigismund II Augustus, King of Poland and Grand Duke of Lithuania, and became a free imperial city at the end of the last Archbishop’s reign, the rest of the country was divided between Sweden, Denmark, the Polish-Lithuanian Union and the Duchy of Courland (vassal of Poland-Lithuania).

As early as 1582, the destinies of Latvia and Estonia separated. They recrossed later on during the Great Northern War (1700 – 1721), which opposed Russia and Denmark to Sweden. It is this episode that would seal over 200 years of common history. The defeat of Sweden gave Russia the status of  major power on the Baltic Sea, and the Treaties of Stockholm (1719) and Nystad (1721) ceded Latvia (still Livonia at that time) and Estonia to Russia.

Following the treaty of Brest-Litovsk, the Baltic states were ceded to the German Empire. However, the decay of the German defeat of 11 November 1918 recognized the sovereignty of Estonia and Latvia as early as 1919. These were of short duration since the two countries were annexed again by Russia. Occupied by the Wehrmacht as early as 1941 and then restarted in 1944, the two countries were annexed under the status of Soviet Socialist Republic under the USSR.